You Can Meet People’s Need for Water

Just $6 Can Give Someone Safe, Clean Water Through a Water Filter

Every 90 seconds a child dies of a preventable waterborne disease. The United Nations recently reported that one in four people worldwide lacks access to safe, clean water. And if we do not act now, by 2030 over 1.6 billion people will be left without clean water.

In the toughest places water filters are often people’s only option for safe, drinkable water. This year Unto® plans to send 4,750 water filters to suffering families in 18 countries where clean water is critically needed.

To achieve this goal $200,962 is needed. Our local staff teams tell us that if the funds were available, they could distribute three times as many water filters — the needs of the people they serve are just that great.

A long-lasting water filter costs $42 to purchase and distribute. Since each one serves at least seven people, that means you can provide access to clean water for just $6 per person! Your gift now will meet an immediate physical need — and give them the opportunity to hear about the eternal hope of Jesus.

These are not just any water filters. They are not like the ones many of us use in our homes that must be replaced several times a year. They are often used to protect children in schools and orphanages or to serve people in churches or medical clinics. With proper care and cleaning, these filters can last 10 years! That means your gift today will give families safe, clean water now and for years to come.

In villages that do not have a well, water filters are the only solution for obtaining safe, clean water. In times of disaster, or in places where extreme terrain and arid conditions make drilling wells impossible, water filters can save lives.

Providing clean water is one of the most effective strategies our staff members have for meeting tangible needs and reaching people with the message of hope. As people respond they are often able to establish new churches too.

Will you donate today to give someone access to clean water and the opportunity to hear about the eternal hope of Jesus?

A Water Filter for Gogo

Gogo could not hide her gratitude — and relief.

As a victim of Cyclone Idai, she experienced the worst hurricane to ever hit the Southern Hemisphere. She and her grandchildren had taken shelter in their small home as 110 mph winds ripped through their community. Countless homes and lives were lost in the storm. Amazingly, Gogo and her grandchildren escaped unharmed, despite the extensive damage their house sustained.

As the storm passed even more challenges flooded into Gogo’s rural village in Zimbabwe. The local water source was already contaminated. Heavy rains and mudslides made the problem even worse — washing debris, sediment, and even death into nearby streams and rivers. Dangerous waterborne diseases began to quickly rise.

Gogo worried about protecting her grandchildren. Thankfully, people like you stepped in, providing her family with a water filter that gave them safe, clean water to drink when there were no other options.

Gogo was so grateful for the water filter she received. She even went around to other families in her village, helping them prepare their new buckets and filters for use.

As our local staff members distributed the water filters, they had the opportunity to share the eternal hope of Jesus with people in her village. One local pastor reported that he has seen a gradual increase in church attendance following the storm. In the midst of overwhelming devastation, people experienced the kindness of Jesus, and many responded to the message of eternal hope! 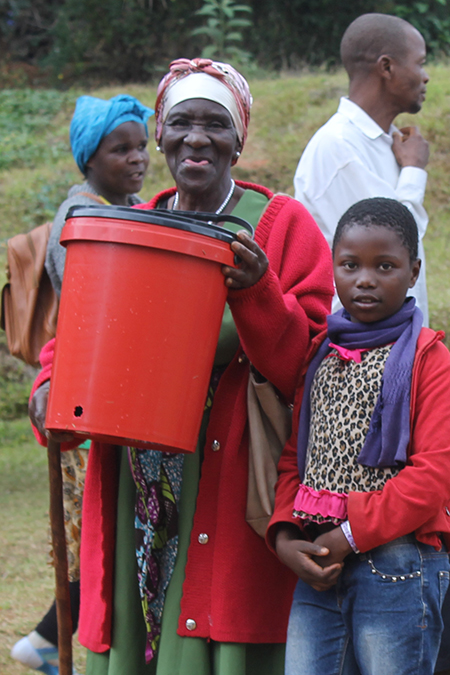 Yes, I want to give more people safe, clean water!